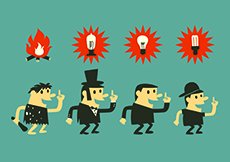 The One About How Software Development Was Evolving

Software is evolving, but what is actually moving the progress? Apparently it’s end-user who are to gain from all the benefits of the 21-st century. But are users ever satisfied with software quality? They were some time ago when only programmers were dealing with software. The less tech-savvy people are getting their hands on all kinds of apps the less they are satisfied with the results. Where is this leading us?

There was once a time when merely a couple of chosen people were using software at all. All of those people were programmers and thus they were kind developing software to serve their own needs. Truly a golden era that was as all had a deep understanding of every process and issue they will be facing and all were making applications that were of actual use by people who really knew how to use them. Then came business…

Metal age: Hey, I can make money with that!

There was a business man with the idea of making software serve everybody from a mid school history teacher to a NASA rocket engineer. More people, more money. The math was simple. But that is exactly when difficulties began to show up.

At that time some people already had ‘personal computers’ and the businessman had a deep understanding of all the opening potential. So he has gathered a couple of programmers at one spot and told them to create something that can calculate budgets or send letters. Something easy in use. Something all will gain from.

Developers created masterpieces. Things like WordStar have changed writing forever and there were many more examples of success.

But what may a mid-school history teacher who has not experiences software before say about all that glory? He was amused and intrigued with the potential, yet he was confused with the software’s appearance and the ways he should use it. He was even irritated with new applications often. Why was that happening? Programmers treated users as if they were also programmers.

When there is competition on the market you do wish to be the best, right? Simple businessman logic. And when everybody is making good software that is uncomfortable and ugly the only way to win is to make the application look good, right?

The next closest thing to golden age: Time of Product Design (today)

What was the result of most battles of the previous era? Marketing and development became two separate niches with a common goal but a large set of borders and limitations. People who were into design and usability were almost forgotten, yet they strived to survive by all means. This ‘civil war’ was hard and bloody, which makes the fact that any software was even released a complete wonder.

Things needed to change and while the market was unstable there were representatives of the previously mentioned third group to divide and conquer with the shared power of developers, marketers and designers at their disposal. That is how evolution works after all, the fittest have survived. And we were able to witness companies like

That is about how we got to the software world we are living in.