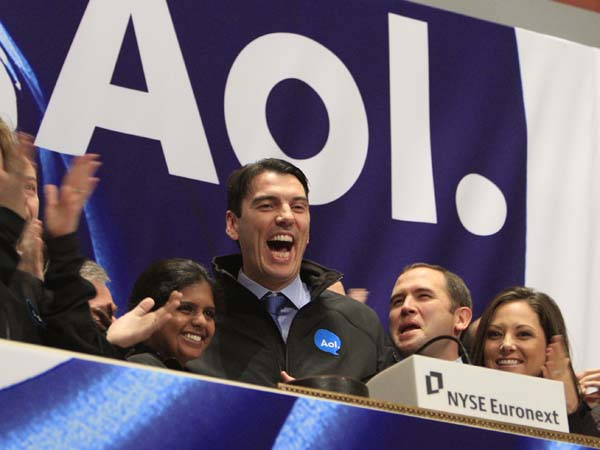 Chief Executive of AOL Tim Armstrong rings the opening bell together with the representatives of the company at the New York Stock Exchange.

It has not been lost on Tim Armstrong, chief executive of AOL that September was not kind to CEOs of distressed tech companies. (That is in case if you suggest $10 million severance packages to be unkind).

So no one can blame him for hopelessly trying to find a purchaser for the money-losing Internet relic he began to run in March 2009. But time is running out.

In the past couple of weeks Armstrong has been meeting together with top shareholders in order to push the idea of a sale to Yahoo Incorporation which may wring up to $1.5 billion of cost savings, in accordance with learning of the discussions.

That is a great plan, wait for one little detail: The company which Tim Armstrong wishes to swoop down and save AOL is amidst of its own existential crisis.

Carol Bartz, Yahoo CEO was one of the CEOs who was fired previous month (together with Leo Apotheker, HP chief executive) after the board of the company determined that she wasn’t increasing revenue and she couldn’t formulate a clear strategy for Yahoo to compete successfully with Facebook and Google for online ad dollars.

The board of Yahoo hasn’t any idea whether to sell the whole company, sell shares of it, or detect a CEO to give a fly to another turnaround. That is not in “internal review” mode, in other words known as “let’s try inventory and see what we may be sold for”.

In such situations companies are not likely purchasers, though Armstrong may keep dreaming. As well he can, since his dreams doubtless are more pleasant than practicability of running a devoted Internet pioneer whose shares were less than 48% through Wednesday since time the spinoff from Time Warner in December 2009.