This is a mobile application for iOS and Android that allows users to publish and view scientific posters while listening to audio explanations about their content. The goal of the app is to help users advance their knowledge in different scientific domains through visual and audio insights from conferences and lectures.

The major programming language for Android application development is Java, while iOS apps were written with Swift. We had to gather a team of engineers who are experienced in both technologies. As a result of the combined effort we packed the application with such functionality:

We had to conduct a number of testing sessions with users to ensure great app performance. We’ve checked the app for high load resistance, usability, and functionality. It took us four months to create the Android application. After deploying the project to the production environment, our team continues to provide support and maintenance services for both the iOS and Android applications.

We are experts in many other advanced technologies, languages, and web development tools that can push your PHP-powered solution even further. Tell us what you’re aiming for, and we will help choose the best technology and talent for your goals. 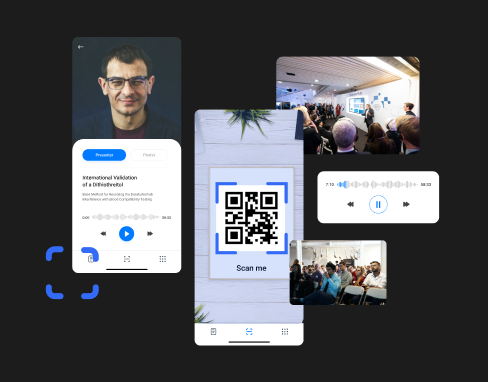 Users who are interested in scientific conferences can now keep track of posters without missing important information. There are currently about 10k users who installed and use this mobile app regularly.